Soba is the Japanese word for buckwheat, and these noodles are both delicious and good for you.

Learn the tricks about how to cook and serve them in the traditional dashi broth, along with wakame seaweed and fried tofu.

A true culinary journey for your taste buds.

Senêt is convinced that yoga, in combination with a balanced diet and lifestyle, can help everyone have a more creative life.

In the late 1970s, he discovered macrobiotics and studied directly with the Japanese master Michio Kushi, later working with Kushi at his Brookline, MA institute in the 1980s.

He organized macrobiotic seminars for Kushi in Europe and translated on of his manuals,The Book of Oriental Diagnostics, published by the French editor Guy Trédaniel.

He is very interested in the connections between food, agricultural pratices and policies, and environmental issues.

After more than forty years living according to the principles of yin and yang, he is a testament to the benefits this approach can have on daily health and vitality. 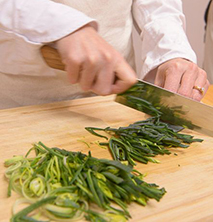 Mastering knife skills is essential for increasing your speed and pleasure in the kitchen.

There's a technique to learn that will boost your capacity to produce delicious, beautiful meals in no time.

The little bonus for this class: you'll go home with your pre-cut vegetables for a meal or two in the days ahead!

Pamela’s interest in cooking goes back to her first failed custard when she was about 10 years old. She grew up in a family of uninteresed cooks (to say the least), and suffered from the standard American diet (SAD) for twenty years until she first came to France and her life began to change.

A junior year abroad in Montpellier, France from 1990-1991 opened her eyes to the realm of fresh ingredients and a range of fruits and vegetables she never knew about in her native Michigan. She completed her studies in art history, earning a Ph.D. in 2005. She taught for 8 years as assistant professor at the University of Rhode Island.

Moving towards a vegetarian diet after starting to practice yoga in the year 2000, she discovered the teachings of macrobiotics once she met Senêt and learned the traditional principles of the philosophy from him.

A major bout of sciatica in 2009 pushed her to reexamine her dietary practices and principles, and she sought out specialized training from the Kushi Institute in Becket, MA, where she took part in the Macrobiotic Certificate program in 2010. She has also studied health-supportive cooking at the Natural Gourmet Institute in New York City and has taken many workshops and classes in Providence, RI and Paris, France.

Author of two books, Yoga Food (Mango, 2016) and Renouer avec le rhythme des saisons (Rustica, 2017), Pamela continues her culinary research to develop even better-tasting, more appealing balanced dishes. Her professorial pedagogy comes through in her classes, as well as her passion and enthuiasm for all GOOD FOOD! Nourish the eyes, nourish the taste buds, nourish the heart: yoga teaches us that you can't separate one from the other.